Len Saunders graduated with honors from the University of Bridgeport in Connecticut, majoring in Physical Education. He later went on to receive a master's degree in exercise physiology from Montclair State University in New Jersey. Len is an award-winning, best-selling author and a motivational speaker in the fight against childhood obesity. He is recognized nationally for his innovative wellness events. Recently, you may have seen Len on such media giants as CNN, Good Morning America, CNBC, The Today Show, ESPN, Nickelodeon, MSNBC, The Fox Channel as well as the front page of The Wall Street Journal. 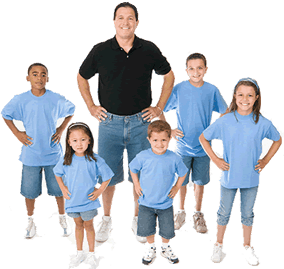 Saunders has been distinguished as a leader in the field of children's health, fitness and wellness for over 40 years. He has won awards at the local, state and national levels for all his efforts to reduce childhood obesity. He has been a guest speaker at universities as well as state and national conventions. Len has been invited to the White House on numerous occasions. In the late 1980's, Len served as a consultant to President's Council on Fitness, Sports and Nutrition. He is currently an American Heart Association expert spokesperson on the issue of childhood obesity.

Len's contribution to children's health has literally reached millions of children and their parents worldwide. He has written articles for various media outlets including US News & World Report, Sports Illustrated for Kids, FOX News, MSN, AOL, PBS, Muscle & Fitness, USA Today, Working Mother, The National Wildlife Federation and Yahoo. Recently, Len worked with The New York Times Company as an expert in the field of children's health. Some of Len's articles have been used for nationally syndicated television shows on ABC-TV. Len is frequently sought after for quotes from television and print media outlets. Sports Illustrated has called Len "high spirited", while a quote from Ladies Home Journal says, "No one is more committed to building stronger kids than Lenny Saunders."

Len is best known for creating Project ACES (All Children Exercise Simultaneously), an internationally recognized program that literally has millions of children from all 50 states and over 50 countries exercise in unison during the first Wednesday in May. He has created dozens more nationally recognized programs that teach children about leading a healthy lifestyle. Len is also an accomplished author of seven books, with his most recent, ‘I Can Do That’ released in 2017.

Len's philosophy to a child's positive well-being is straightforward. You can inspire a child to achieve proper health by keeping things simple, fun, unique, entertaining and educational. It is also important to make sure a child can sustain a high degree of success with their objectives. Since most children have different needs, they must be motivated in diverse ways to get a positive response. Keeping goals at a child's specific level will provide rewarding outcomes. This philosophy has been applied to Len's comprehensive national programs which have successfully directed millions of children to lead healthier lifestyles.

New informative video about the work of Len Saunders. To view a larger version, simply click the YouTube logo on the bottom right.

Len Saunders is an award winning author of health, fitness and wellness books. His books have inspired thousands of families to lead a healthy lifestyle. The link below will lead you to his library of books. Please note, it will take you out of the current web page.

For over thirty years, Len has been praised for his work helping children and their families lead healthy lifestyles. Celebrities, athletes, presidents, and various media sources have complemented his work. Read what they had to say!

Are you a member of the media looking for a source regarding health, fitness, wellness, nutrition, obesity or healthy lifestyle? Please use the handy contact form to reach out to Len.

One of Len's missions is to educate the public on the importance of leading a healthy lifestyle. Please visit Len's media page where you can view him on such media giants as CNN, Good Morning America and FOX News

Len is available to speak for your corporation, convention, or school system on the topic of healthy lifestyle or childhood obesity. Use the handy contact form to communicate with Len.